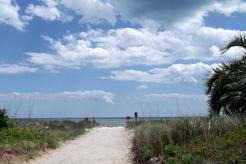 ​ Debbie Richard is a native of West Virginia. Born in Parkersburg, she spent her early childhood in the rural community

of Munday in Wirt County, and lived near Walton in Roane County during her high school years. Debbie studied Secretarial

Science at West Virginia Career College in Charleston where she completed her courses in 1987 with honors.

She moved to South Carolina as an adult, following her love of the ocean. After twelve years as a Report Analyst for a healthcare

organization, she resigned in March 2009 to become full-time caregiver for her mother, Naomi Karen (Maze) Richard, who grew

up near Big Bend in Calhoun County, West Virginia. Debbie’s mother passed away in March 2011. ​

Debbie is listed in the Directory of Poets & Writers as both a poet and creative nonfiction writer. Her poems have appeared in various journals and magazines including Torrid Literature Journal, Adelaide Literary Magazine, Scarlet Leaf Review, WestWard Quarterly, Halcyon Days, and others. "Hills of Home," a memoir about growing up in Appalachia, was released in 2014 by eLectio Publishing. "PIVOT," an illustrated book of poetry, was published in January 2019 by Adelaide Books of New York. "CROSSWINDS," her latest volume of poetry was published in November 2021 by Finishing Line Press. Debbie is a member of South Carolina Writers Association.